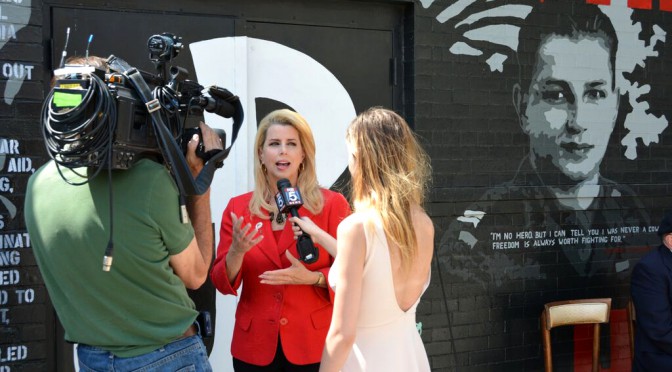 The Jan III Sobieski Award for the Champion of the Polish-American Cultural Exchange, recognizing Rita Cosby, for her new book Quiet Hero. Through her book Rita is bringing awareness about WW2 Warsaw Uprising to the American public. After 60 years of silence, she tells the exciting story of her father Richard Rys Kossobudzki, courage, pain and sacrifice in the fight for the Liberty, which is a common bond for Americans and Poles.

Rita Cosby is a veteran TV news anchor and senior correspondent. Cosby has received three Emmy Awards, the Jack Anderson Award for investigative excellence, the Matrix Award, and the Ellis Island Medal of Honor. The daughter of a Danish mother and a Polish father who came to the U.S. after World War II, Rita grew up in Greenwich, CT. She balanced college with a position at WACH-TV, the local FOX affiliate. Jobs as an anchor/reporter at KERO-TV in Bakersfield, California and WBTV in Charlotte, North Carolina soon followed. At Fox, she hosted both The Big Story Weekend Edition and Fox News Live with Rita Cosby. She has interviewed more than a dozen world leaders, conducting historic interviews with Palestinian leader Yasser Arafat and Israeli Prime Minister Ariel Sharon. Rita was the first reporter to see prisoners at Guantanamo Bay. While broadcasting live from Belgrade during the NATO bombing, she broke the news that three American POWs were going to be released. In 2001, Rita’s interview with flight attendant Anne Marie Smith, led to a U.S. Attorney’s Office investigation of Rep. Gary Condit for obstruction of justice and witness tampering. Cosby served as a lead reporter during the 1996 and 2000 Presidential campaigns. During the Monica Lewinsky investigation, she broke the news that President Bill Clinton was going to be subpoenaed to testify before the grand jury. On September 4, 2007 Cosby released a book about Anna Nicole Smith, titled Blonde Ambition: The Untold Story Behind Anna Nicole Smith’s Death. Through her last book Quiet Hero – secrets from my father’s past”, Rita brings awareness about WW2 Warsaw Uprising to the American public. After 60 years of silence, she tells the exciting story of her father Richard “Rys” Kossobudzki, pain, courage and sacrifice in the fight for Liberty, which are common bonding grounds for Americans and Poles. Senator McCain said: Rita’s story is one that will touch every family… a loving and poignant tribute to her POW father and Freedom.