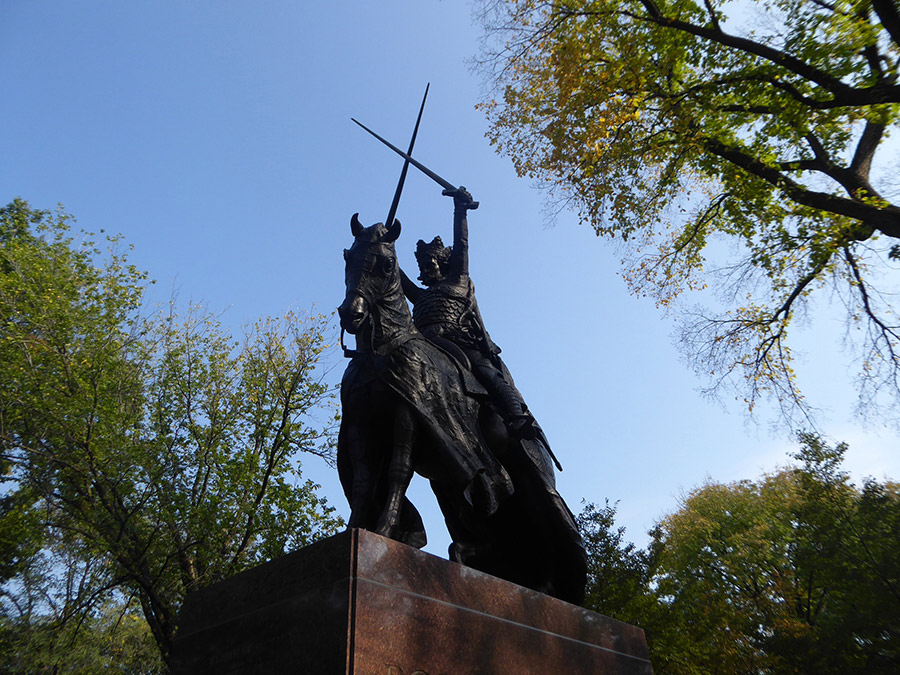 Six hundred years ago, this man atop his bronze horse in full battle regalia, pointing his dual sabers to the sky, was the single most powerful on earth. He was Poland’s King Władysław Jagiełło, and on July 15, 1410, he led an army of 50,000 Polish and Lithuanian knights, cavalry, and foot soldiers against a marauding horde of 32,000 invading Teutons – primarily Germans — near the small town of Grunwald. By sundown, Jagiełło’s soldiers had slaughtered over 26,000 of the invaders, utterly demolishing their army.
The Battle of Grunwald, as it came to be called, would reshape Central Europe for the next 300 years, placing King Jagiełło in command of a vast, united Polish-Lithuanian empire that included large swaths of modern Germany and Russia. It was also one of the most civilized places in Medieval Europe, complete with bicameral legislature, checks on royal power, religious tolerance (this is when Jewish people came to escape persecution further west), and a home to Renaissance art. Jagiełło’s victory was one of two game-changing military events of the Fifteenth Century, the other being England’s 1419 triumph over France at Agincourt, immortalized by William Shakespeare in his play Henry V.

Personally, I had never heard of King Jagiełło (damn American education system!!) until last week when I happened to come across this fantastic statue of him in New York City’s Central Park. The work of Polish sculptor Stanislaw Ostrowski, it served originally as centerpiece for Poland’s exhibit at the 1939 New York World’s Fair. But the outbreak of World War II, in which Poland was quickly devoured by Nazi Germany and Stalinist Russia, left it stranded in America. New York Mayor Fiorello Laguardia fell in love it and lobbied to keep it in New York City. In 1945, the Polish government-in-exile agreed, and it was moved to its current spot in Central Park.

Next time you’re in the neighborhood, don’t miss it. It’s at the east end of Turtle Pond, near the Great Lawn, not far from Cleopatra’s Needle, and an easy walk from the Upper East Side.