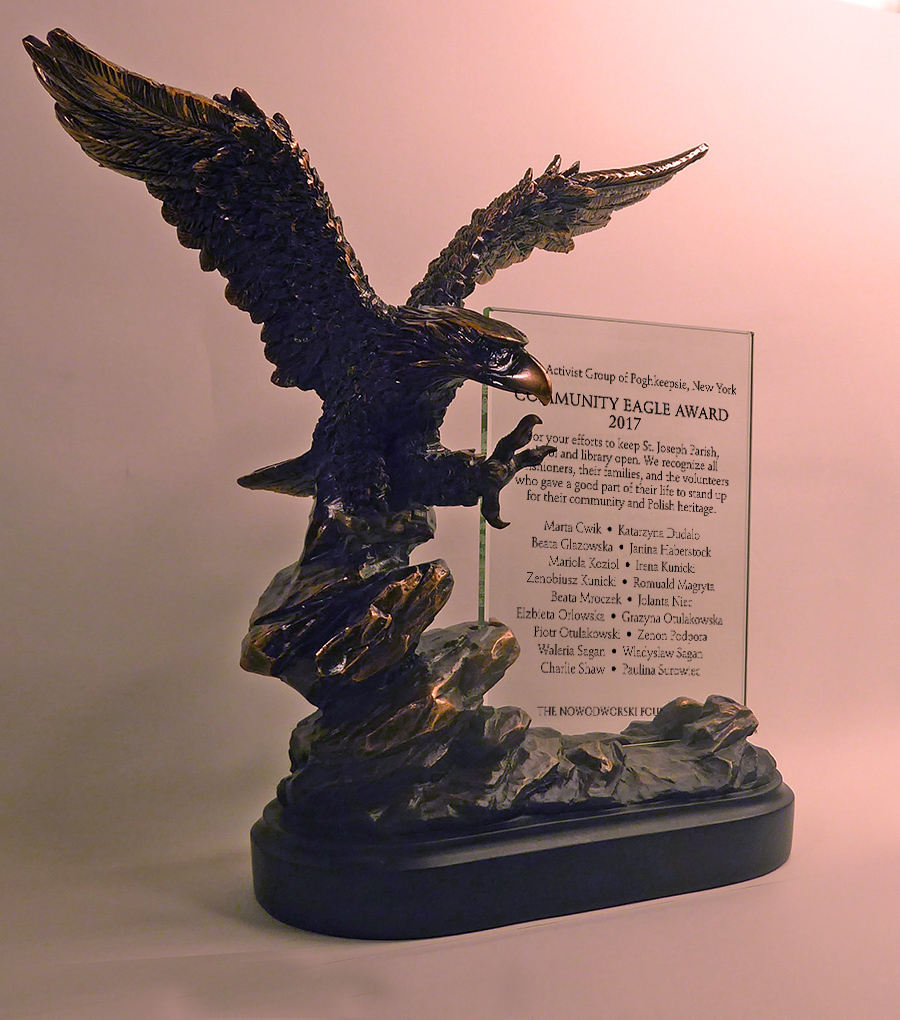 for their efforts to keep St. Joseph Parish, school and library open. We recognize all parishioners, their families, and the volunteers who gave a good part of their life to stand up for their community and Polish heritage.

The Polish Language School was founded in 1969 by Władysław Sagan with the help of his wife Valery, a recipient of Janina Igielska award. Waleria Sagan was the first principal of the school and served this function for the next 30 years. She was awarded the National Education Medal. They both promoted traditions and Polish culture in Poughkeepsie and beyond/ • Irena Kunicka has been a teacher of Polish language at Poughkeepsie School for over 35 years and previously taught children at Yonkers School for 5 years. She’s also a recipient of the National Education Medal and the Janina Igielska Award. • Janina Haberstock, a Polish language teacher for over 20 years, has prepared the youngest children for various school and church ceremonies. Ms. Janina has also been awarded the Medal of National Education • Romuald Magryta, worked as a teacher for adult students • Zeon Podpora, a teacher with many years of experience, was responsible for the technical development of many
school events • Jolanta Nieć, 6th and 7th grade teacher who has taught Polish youth for more than 15 years. Jolanta Nieć is also responsible for preparing graduates for the Regents Exam and Lote. • Beata Głazowska, a teacher with over 15 years of experience, teaches 5th grade students. She served as a vice principal for nearly 10 years. She organized many school events and prepared children for various school competitions • Katarzyna Dudało, a former principal of the Poughkeepsie School, has over 15 years of experience in teaching grades 7 – 8. Katarzyna created a school website, which helped spread the word about the school, which helped the school become more popular with the younger Polish community • Paulina Surowiec is the current principal of the Polish school. Ms. Paulina is a fantastic organizer, who inspires parents to collaborate with the school and beyond.
Ms. Surowiec introduced “Kangur”– the International Math Competition to the school. She’s organized many meetings with Polish authors. • Beata Mroczek is the current Vice Principal of the School of Polish Language and the 1st grade teacher.

At the moment, the library has eight thousand books and counting. Readers will find Polish literature classics, novels, children’s and youth literature, religious books and periodicals. The library also has a rich movie library with over 600 films in Polish. We are on the list of book collections registered with the Department of Cultural Heritage of the Ministry of Culture and National Heritage of the Republic of Poland. This means a lot to our compatriots who support access to Polish books abroad. Our library works thanks to the work and commitment of many volunteers and thanks to donations. We are working towards making our library the center of the Polonia community. We organize many cultural and charity events. The official opening of the Polish Library took place on Sunday, April 4, 1993. Those who have been with us for 25 years include: Irena Kunicka (Secretary and Treasurer) Waleria and Wladysław Sagan, Elżbieta Orłowska, Grażyna and Piotr Otulakowski and Marta Katyńska Ćwik (Librarian).

St. Faustina the American-American Church Preservation Society is a non-profit organization that was founded in 2014 by a group of volunteers. Among others, Charles P. Shaw, chairman, Katherine Dudala – secretary, Mariola Kozioł – treasurer. The Association St. Faustina is meant to help the Polish faith community in the entire mid-Hudson area of the New York Archdiocese, their parishes and churches before possible closure, and in particular the church of St. Joseph in Poughkeepsie. This association is fighting for the reopening of the doors of St. Joseph Church for Sunday masses in Polish language. Parishioners from the Polish church of St. Joseph are constantly praying every Sunday at 11 a.m. in front of their beloved church since its closure on August 2015. Regardless of the weather, they have been meeting and praying for over 2 years. In November 2014, many parishes in the Archdiocese of New York received a decree that they would be merged with other parishes. Many parishes disagreed and tried to fight the decision. Many of them were in contact with the organization. St. Faustina aims to prevent the churches built by the Poles from being deconstructed and later cashed for the needs of the Archdiocese. So far, thanks to the Association. St. Joseph Church remains intact. It received a preemptive decree from the Congregation for the Clergy on March 2, 2016, which opened the door to many other parishioners throughout the United States to receive Holy Masses in their churches at least twice a year on the anniversary of the church’s ordination and patronage. The activities of the Association St. Faustina demonstrates the solidarity of the Polish community throughout the mid-Hudson Region of the New York Archdiocese.

Vassar College Station, New York. Polish program “We Remember Our Fatherland” started broadcasting Polish music 25 years ago. Every Saturday morning at 9 a.m., 91.3 MHz FM (WVKR Vassar College station in Poughkeepsie), we have the opportunity
to present our new, older and oldest hits to our listeners. Hosts are alternate, Waleria and Wladysław Sagan, Zenobiusz Kunicki and Piotr Otulakowski. The show, which also includes local news and “wish concert”, addresses Polonia from Poughkeepsie and the surrounding areas.